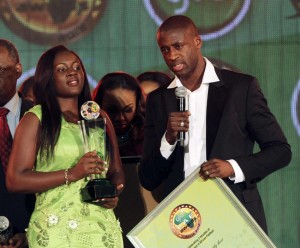 Ivory Coast midfielder Yaya Toure has been named the African Player of the Year for the second year in succession, the Confederation of African Football has announced.

He joined Senegalese forward El-Hadji Diouf, formerly of Liverpool and Bolton, on two victories although he has some way to go to eclipse Cameroonian ex-Barcelona striker Samuel Eto’o who has won four titles.

The Ivory Coast player was crowned at an awards gala in Accra, the capital of Ghana, today after being voted for by the head coaches or technical directors of the national associations affiliated to the CAF.

African Nations Cup winners Zambia were named team of the year with their coach Herve Renard named coach of the year.