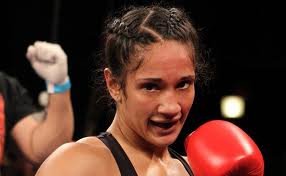 As soon as the bell sounded Tejada tried to quickly make the bout a dogfight, but the former IBF world champion was much more experienced, Serrano’s precise counter-punching sent the Dominican to the canvas for a total of three times, Tejada was unable to return to her feet. Time of the stoppage was 1 minute and 20 seconds of the first round.

With the victory Serrano captured the UBF Inter-Continental super featherweight title, she along with her sister Cindy “Checkmate” Serrano now both hold titles in the same division. With the win Serrano gets a world title shot in 2013.