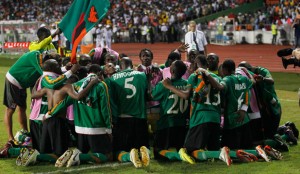 Zambia gave in to a 2-0 loss to Angola on Saturday, as both teams prepare for the African Cup of Nations that kicks off on 19 January in South Africa.

Inspite the loss, Football Association of Zambia president Kalusha Bwalya felt it had been a worthwhile match.

“Both teams played well and it was highly competitive – despite it being a training game,” he said.

“The sides matched each other and the early goal unsettled us.”

Niamey there was a 3-1 win for Niger over visitors Togo, as both teams prepare for the Nations Cup.

Issoufou Boubacar opened the scoring for the hosts after 17 minutes before Mohamed Chikoto scored an own goal to level things for Togo.

Chikoto made amends in the second half as he scored at the right end, before another own goal from Togo’s Vincent Bossou in the final minute, in which Niger carried the day.