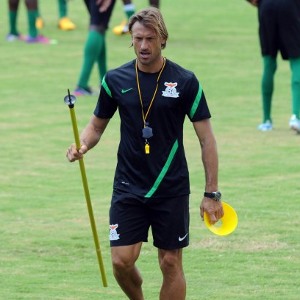 Coach Renard has criticised African football’s ruling body CAF for not allowing them the chance to represent the continent at this year’s Confederations Cup.

Zambia, having won the Cup of Nations in 2012, would normally be flying the flag in Brazil, where the African champions will face world and European title-holders Spain, Uruguay and little Tahiti.

But due to CAF’s decision to switch the Nations Cup from even to odd-number years to avoid every second tournament clashing with a World Cup, it will be the winners of the 2013 Nations Cup, and not Zambia, who go to South America.

Renard, speaking out in the aftermath of his defending champions’ first round elimination here on Tuesday, felt Zambia should have been given the opportunity in a face-off against the team who will be crowned 2013 Nations Cup winners on February 10 in Soweto.

“CAF are very happy that Zambia are not going to the Confederations Cup, they think we are not sexy or famous enough to represent Africa that’s the truth,” said the Frenchman.

He added: “It would be fairer if the winner between the 2012 Nations Cup champions and the 2013 winners went.

“But it never entered their thinking CAF don’t want us to go. They made their decision, and it is the 2013 Cup winners who will represent Africa, not us.

“Unfortunately, we were only champions for one year.”

Zambia’s title defence ended prematurely when they suffered three successive first round stalemates to leave them stranded in third place in Group C behind Burkina Faso and Nigeria.

Despite becoming the first champions since Algeria in 1992 to fail to progress to the knockout stages, Renard praised his players.

“Everybody is sad but my players did their maximum, and I’m very proud of them.

“I loved my team tonight, I can’t play with eight defenders, if there is someone who is responsible then it’s me, not my players.

“It’s better to have won something in your life than always qualify for the quarter-finals, but never win anything.”

As for his own future as Zambia coach, Renard, who once had a brief spell at English lower-league side Cambridge United, intimated that he would still be in the post to supervise their qualifying campaign for the 2014 World Cup.

“Zambia’s not like other places in the world,” he said in a reference to the way some national coaches are asked to fall on their swords straight after a setback such as the one suffered by the fallen champions.

Zambia’s captain for the night, goalkeeper Kennedy Mweene, suggested the threadbare and sandy Mbombela Stadium pitch had played some part in Zambia’s downfall.

“The pitch contributed we weren’t quite as efficient in front of goal. But I’m not disappointed, we were pressing them hard,” he said after the tense goalless stalemate.