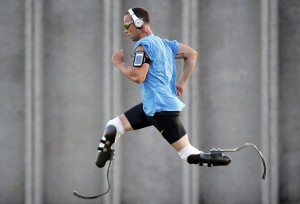 Oscar Pistorius has formally called off the races that were due in coming months in the face of charges of murdering his girlfriend on Valentine’s Day, his manager said.

The Olympic and Paralympic athlete was charged on Friday with the premeditated murder of 29-year-old Reeva Steenkamp, who was shot dead at his luxury Pretoria home. He had been contracted to compete in races in Australia, Brazil, Britain and the United States between March and May.

“I have decided that following these tragic events that we have no option but to cancel all future races that Oscar Pistorius had been contracted to compete in, to allow Oscar to concentrate on the upcoming legal proceedings,” manager Peet van Zyl said.

Sponsors and partners would in the meantime maintain their contractual commitments awaiting the outcome of the legal process, said Van Zyl uin a statement. Pistorius is accused of killing his girlfriend who was shot four times. Police reportedly found a bloodied cricket bat at the house, according to a local Sunday paper.

Pistorius’ family denies he intentionally killed the blonde covergirl. His father said he had “zero doubt” his son had mistaken Steenkamp for an intruder and his 89-year-old grandmother told AFP the killing was accidental. The family has said the 26-year-old, who is widely seen as an adrenaline junkie with a love for speed and guns, is “numb with shock as well as grief” over Steenkamp’s death.

South Africa’s independent City Press newspaper quoted police sources saying the investigators had found the cricket bat. “There was lots of blood on the bat,”

Police are probing whether the bat was used to assault Steenkamp, who was shot four times, including in the head, during the early hours of Thursday, or if she may have used it to defend herself, the newspaper said. “The suspicion is that the first shot, in the bedroom, hit her in the hip. She then ran and hid herself in the toilet… He fired three more shots,” the police source told City Press.

Authorities have rejected suggestions that Pistorius mistook Steenkamp for an intruder and on Sunday police spokesman Neville Malila refused to comment on the reports of the cricket bat.“I dont know where they got it from, but they didn’t get it from any official source in the police,” Malila told AFP.The newspaper described the case against Pistorius as “rock-solid”.

Other reports suggested there had been an altercation between the two lovers that had spilled over from Wednesday night, when neighbours called security guards complaining “commotion” inside the Pistorius home.

The British Sunday People said a sobbing Pistorius had phoned his friend, Justin Divaris around 4:00 am (0200 GMT) on Thursday telling him “My baba, I’ve killed my baba (baby inAfrikaans). God take me away.”

Pistorius was a national icon who inspired people around the world when he became the first double amputee to compete against able-bodied athletes in the Olympic Games last year. His bail hearing on Tuesday will come the same day a funeral will be held for his slain girlfriend. He faces a life sentence if convicted of premeditated murder.

His father Henke Pistorius, 59, was quoted by Britain’s Sunday Telegraph as saying the family had “zero doubt” his sonshot Steenkamp on instinct after mistaking her for anintruder. “When you are a sportsman, you act even more oninstinct,” he said. “It’s instinct things happen and that’swhat you do.”

When contacted by AFP, the father denied speaking to theSunday Telegraph and refused to provide any further details.The newspaper’s reporter Aislinn Laing confirmed she hadspoken to the father on Saturday. Echoing the family’s line, Pistorius’s 89-year-old grandmother also indicated the shooting had been accidental.

Pistorius, who broke down sobbing in his first court appearance on Friday, has built up a powerful team of lawyers, medical specialists and public relations experts for his

One of the lawyers, Kenny Oldwage, acted for the driver in a 2010 accident that killed former president and anti-apartheid icon Nelson Mandela’s great-grandchild Zenani. The driver was acquitted.