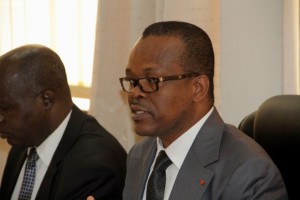 The Ivorian authorities of  sports are looking for ways to avoid further failures of the Elephants at the next Afcon. This has led the sports minister to meet the Ivorian Football Federation (FIF).
After the interview with Sidy Diallo, President of the IFF, the sports minister, Alain Lobognon sports called media for a briefing. In his speech, the Minister gave an overview on the development of football in Côte d’Ivoire.

Similarly, Alain Lobognon discussed the management of football in the country of Didier Drogba.
“This is a country where no nomination has been made for an African Cup as the Afcon cadets. Now we need to improve our infrastructure and even youth football. In 1983, cadets who played the World Cup were later found in senior years later to win Afcon 1992. This means working at the base. “

“We’re going to change everything, both in terms of football and all sports because it is our sport as a whole which has fallen. I’ve decided to put an end to the distribution of special taxes and I’m not going to give IFF. We will go through. “

“I cannot understand that the national team can be found at Afcon whereas the National Technical Director is maintained in the country.”