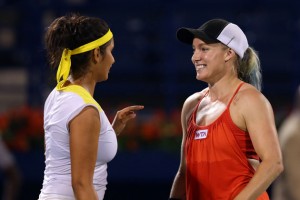 On Saturday afternoon, Bethanie Mattek-Sands and Sania Mirza position themselves as one of the best doubles teams in the world. Both Bethanie and Sania defeated Nadia Petrova and Katarina Srebotnik for their second Premier-level title of the year at the Dubai Duty Free Tennis Championships.

In the finals Mattek-Sands and Mirza, who didn’t lose a set en route, were in all kinds of trouble in that final, winning the first set but dropping the second set and falling behind 6-3 in the match tie-break; but they kept calm and carried on, winning seven of the last eight points of the match to outdo the No.2-seeded Petrova and Srebotnik, 64 26 107, finishing it off with a big Mirza ace up the middle.

“When you play a final it’s not really just about tennis – it’s a lot about nerves and trying to keep positive,” Mirza said. “It’s the ones who are gutsy, or gutsier than the others at that given point of time, which came through. When we went down 4-0 in the second set we were a little passive and defensive. When you play people like Nadia and Kata, you have to be offensive. They’re both 6′ tall, to start with. We knew we had to attack more. And we knew that in a super tie-break anything can happen.” 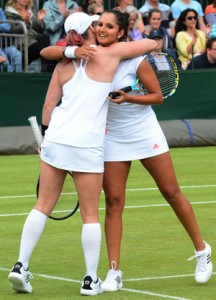 In a sport where so many players are so serious on the court, Mattek-Sands and Mirza are a breath of fresh air, always smiling, laughing, shaking off the bad times and embracing the good ones.

“Except in the early morning practices,” Mattek-Sands added quietly, pointing to Mirza.