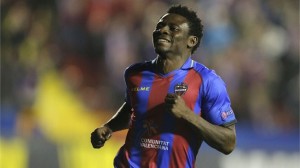 Obafemi Martins could continue his career in the North American Championship soccer MLS.

According to sport365, the Nigerian international striker is in the viewfinder of Seattle.

The club which operates Djimi Traoré from Mali “is willing to align with the release clause of Super Eagle, whose contract expires in June 2014,” said sport365.

Martins, 28, evolves in time in La Liga with Levante in which he found the way of goals seven times in 15 games this season.