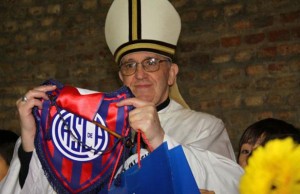 “The cardinals went to pick me at the bottom of the world”! Mario Bergoglio is Argentine! He became the 266th Pope yesterday’s history, the first non-European! We will call François 1er. So he has decided. 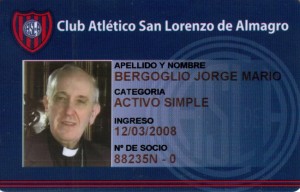 The new pope, Jorge Mario Bergoglio, is not above the passion his countrymen share for football and is an avid a fan of San Lorenzo, one of Argentina’s top clubs.

Bergoglio, who took the name Pope Francis when he was elected to the post on Wednesday, received his San Lorenzo membership card after saying mass at a sports complex near the team’s stadium.

His first words: “The world must take the path of peace, love and brotherhood. “I called a brotherhood within the Church. “I want to ask you a favor: Wether you pray to God to bless me. Good night. See you soon! “

“He says he lives in a permanent state of suffering for San Lorenzo,” said Oscar Lucchini, an architect and fellow fan who handed Bergoglio’s membership card to him after that mass about four years ago.

The club posted a picture on its website on Wednesday that showed a smiling Bergoglio lifting up the club’s colours.

The 76-year-old comes from a modest family of Italian immigrants in Buenos Aires.

As archbishop of Buenos Aires, Bergoglio was known for his unassuming lifestyle. He lives near San Lorenzo’s headquarters and has long travelled the capital city by public bus.

He also shares the pain of his fellow San Lorenzo fans after their defeats, as well as their joy when the team wins. The club last won Argentina’s national championship in 2007.

He was president of the Bishops Conference of Argentina from 2005 to 2011. He opposed with courage to the authoritarianism of the Kirchner couple successively head of Argentina, saving many people from torture and death.

And this Pope loves sports, especially football! He is a big fan of the Argentina team and a club from the district of Buenos Aires, San Lorenzo de Almagro. A club founded in 1908 by Father Lorenzo Massa. “Socio” since 2008 the new pope celebrated Mass in 2011 in honor of Lorenzo Massa, when the latter was on the verge of bankruptcy.

And the club is still there!