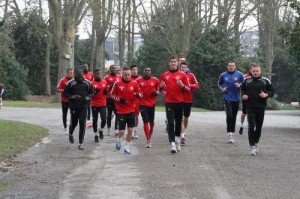 The uncertainty on the participation of Floyd Ayité to the meeting Cameroon-Togo on 23 March is confirmed.

As Africa Top Sports has reported last Monday, the Hawks of Togo should be without the Ayité brothers in Yaounde on Saturday. If both players have advanced to justify their absences by their injuries, it turns out that their health is not as disturbing as this. Especially that of midfielder of Reims.

Floyd Ayité (second from the left after the player in black) participated in training this Thursday with his club Reims. As shown in this photo of jogging that we have researched on the Twitter account of the Champagne team.

Obviously, the former player of Angers, who was suffering from pain in his thigh and has not participated in the last league match of his team, is better.

Didier Six will enjoy it.