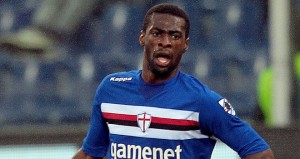 Sampdoria’s Spanish midfielder Pedro Obiang is attracting interest from English clubs but is happy in Genoa, according to his agent.

Reports suggest Manchester City are keen on the 20-year-old, while Chelsea and Tottenham have also been linked. Manchester City seems to be in a fantastic position to sign Pedro Obiang.

However, Obiang’s agent has confirmed there is interest from English sides in Obiang, who is contracted at Sampdoria until 2017.The 21-year-old has been heavily linked with a move to the Premier League, as Roberto Mancini looks to strengthen his squad when the transfer window reopens in the summer.

Obiang – currently a Spain U21 international – is widely regarded as one of the brightest young talents in Italy at the moment, and is close to making a first-team breakthrough at Stadio Luigi Ferraris.