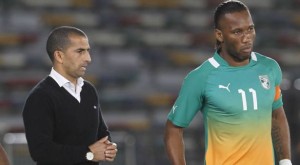 Before facing Mexico in the night from Wednesday to Thursday (01h GMT), Sabri Lamouchi mentioned the return of the captain of the Elephants to the selection. The Franco-Tunisian technician believes that Didier Drogba is happy to be back among his teammates despite his shelved in recent months. “We have not seen the Drogba we know in Afcon because of the transfer to China. He was not really in shape “, said Lamouchi.

To face the Tri, Lamouchi called Drogba who has not appeared in the selection for the quarter-final lost against Nigeria in South Africa. In particular, he missed two games of the 2014 World Cup qualifiers in June. Having returned to his top level as shown by his recent performances with Galatasaray, the former Blue is more determined than ever to finally win with the Elephants.

“Didier is happy to be back with us and he is very motivated by the idea of playing for his country and the selection”, added Lamouchi who will also be without four players of his workforce including Yaya Toure.