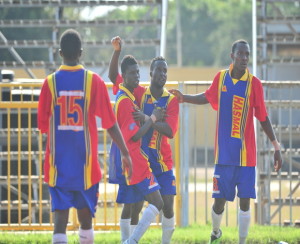 Technical Head for Sekondi Hasaacas Kwabena Amisah is frustrated with management of the club over his contract. Despite sending proposal to the owners of the club, Coach Amissah has had his contract issues hanging. He is demanding a contract by close of week after returning Sekondi Hasaacas to Premier League.
Sources say that Coach Amissah confronted the owners of Hasmal on his contract after the midweek defeat to Hearts and he is undecided over honoring this weekend’s game with New Edubiase. Coach Amisah has played five matches so far but is without a win having tasted two defeats.
Hasaacas drew goalless with Medeama SC and Dwarfs in their opening matches. Hasaacas drew again yesterday with New Edubiase at home.
Information reaching africtopsports  indicates that Coach Amissah is worried whether to continue as head coach or step down due to undecided issues concerning his contract with the Giants of the West, Hasaacas.
credit: Romeo Oduro