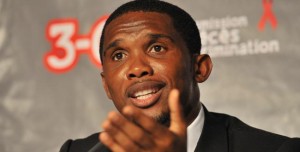 Vincent Kompany is a great player. At 27 years, he is the captain of Manchester City and the Red Devils, the national team of Belgium, for which he chose to play at the expense of his native land, Congo.

Samuel Eto’o, a living legend of football, has praised the Manchester City defender. “Vincent is a natural leader. He is one of the best defenders in the world. I want him to play a good World Cup and he will be spared by injury,” said the Chelsea striker in the columns of Belgian newspaper Het Nieuwsblad.

However, the capitain of the Indomitable Lions of Cameroon would have liked Kompany to put his talent in the service of the Dark Continent. “I would have liked to see him wearing the jersey of an African country. Africa needs leaders like him”, he continued before concluding: “I can say that Vincent is a friend”.

And on Benteke and Lukaku (who could also play with the Congo)? “Too bad for we Africans, and our beautiful continent, because they are great players. But I understand their choice.”

Just like Vincent Kompany, Lukaku and Benteke , there are many of these Africans steeped in talent but choose to play in European countries for various reasons: either because they were born there or because not having choice in their country facing enormous difficulties that seriously compromise the emergence of talent and thus the development of football.