The White House owes the Canadian Prime Minister Stephen Harper two cases of beer as a result of a bet with Barack Obama on hockey matche between Canada and the USA last week in the last Olympic Games in Sochi.

For the women’s final and semifinal in men, both heads of state have bet a case of beer per game. And unfortunately for Obama, Canadians have won twice. 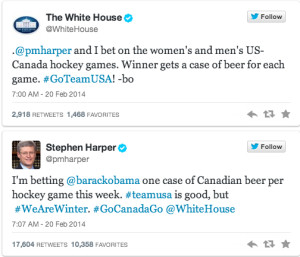 Canadian PM immediately sent this tweet to U.S. President to remind him of the bet:

“Like I said, #teamusa is good but #wearewinter (the name of the Canadian team). @BarackObama, I look forward to my two cases of beer. #CANvsUSA #Sochi2014”