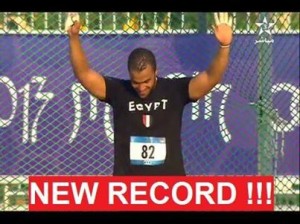 The master of the African continent in the hammer throw is Mostafa Al-Gamel. The Egyptian improved to 66 cm the African record of discipline with a throw of 81.29 m succeeded late last week in Cairo. The information is provided by APA who have learned it from the Confederation of African Athletics (CAA).

With this jet, Al-Gamel beat the previous record held since 2005 by the South African Chris Harmse (80.63 m). His performance also enabled him to establish a new record in Egypt. The former was held by his compatriot Hassan Mohamed Mahmoud (78.21 m).

Gold medalist during the Africa Games in 2011 and the 2013 Mediterranean Games, Al-Gamel (25) is positioned as one of the favorites in the specialty for African Athletics Championships scheduled for this year in Marrakech, Morocco.