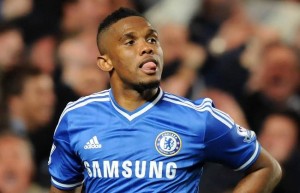 Samuel Eto’o will not play Wednesday with Chelsea against PSG in the quarter -finals of the Champions League. But the Cameroonian striker always eye-catching to media. He was the special guest of “L’ Entretien” on the French channel France 24 Monday.

The opportunity for the Cameroonian captain to shout again high his success despite his skin color. Just like on the set of BeinSport a week earlier, the former Barcelona star has revisited his career with his ups and downs.
“I made the wrong decision, like all young African who dream of going to succeed in Europe. I decided to remain undocumented. I arrived in France with a 10 days visa. I went first to Marseille, Avignon and then I decided to stay in Paris, Notre – Dame. I stayed there several months”.

“It was a difficult time because I spent several months in Paris undocumented. I left my home two or three times since, at the time, everyone was suspected of being undocumented. And when they catch you, they send you back home. It was really difficult because in addition when I went out, it was really cold.”

“I had only one desire, to show the world that a little ‘black’ can be as good as the others if he has the means to express himself. Others before me have done it, George Weah, Abedi Pele, Roger Milla, and Samuel Kuffour. They do not take us seriously enough. I wanted to mark an era.”