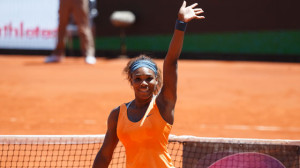 Serena Williams leapfrogs the second round of the Mutua Madrid Open. The American has dominated this Wednesday on the Manolo Santana, Chinese Shuai Peng in straight sets, 6/2, 6/3.

If she can be satisfied with having won more games than the previous opponent of Serena, shaui Peng (42nd in WTA) has not really weighed in this first tussle on clay (note, three on the WTA circuit). Broken on her first serve, she lost the first set on a new break after 27 minutes. In the second set, the World No. 1 takes twice the service of the Chinese and concluded the meeting after 64 minutes of exchange.

Defending champion Serena Williams will face in the third round the winner of the match between his compatriot Alison Riske and Spain’s Clara Suarez Navarro.