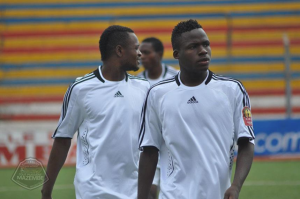 The Confederation of African Football (CAF) surely did not want to get to this. But without realizing it, it may cause serious problems between some clubs and some selections of the continent. And because it has scheduled first leg matches for the first round of the 2015 Afcon qualifiers the same weekend as the first matches of the group stage of the Champions League and the CAF Cup. A situation that already begins to create tension between TP Mazembe and the selection of Tanzania.

Indeed during the weekend of May 16 to 18, the Ravens face Al Hilal in the Champions League . A confrontation that the club Lubumbashi coach, Patrice Carteron intends to play with his workforce in full.

The same weekend will see the football team of the Zimbabwe facing Tanzania in the first round of qualifiers for the 2015 Afcon. A match that the Tanzanian selection does not intend to compete without Mbwana Samatta and Thomas Ulimwengu (top right photo), two major players in the workforce who evolve at TP Mazembe and the Congolese club refuses to release them. Already, the tension is palpable between the two parties.

And it’s not over. Mauritania, Congo, Zimbabwe, Uganda and Kenya are in the same situation. Suffice to say that the standoff has only just begun since the return matches of playoff are scheduled on the same weekend as the second day of the group stage of the Champions League and the CAF Cup.