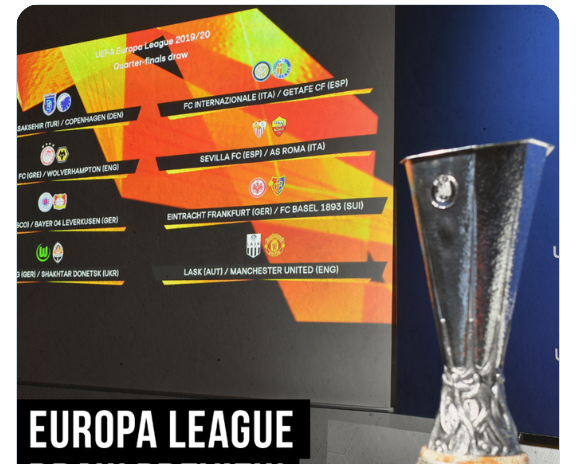 Manchester United will play Istanbul Basaksehir or Copenhagen in the quarter-finals of the UEFA Europa League following Friday draws.

The draws for the 2019/20 Europa League quarter-final and semi-final draw was held in Nyon, Switzerland immediately that of Champions League.

The Reds howeber, still have to complete the job against LASK at Old Trafford in the round of 16.

Manchester United will head to the game on the back of their 5-0 advantage from the first game in Linz.

Thereafter, they will travel to Germany where they will continue their quest for the Europa League title in the last eight.

The quarter-final and semi-final will be played as a knock-out tournament with one-off matches, rather than the traditional two legs.

Istanbul Basaksehir have a 1-0 lead over Copenhagen from the first leg at home.

United met Copenhagen in the 2006/07 Champions League, winning 3-0 at Old Trafford before losing 1-0 in Denmark.

If a place in the semi-finals is secured, it will be against either Olympiacos, Wolves, Sevilla or Roma.

The quarter-finals are to be played on 10/11 August, with the last-four ties on 16/17 August. The exact dates will be confirmed soon.

The final is being staged at Stadion Koln on 21 August, with a 20:00 BST kick-off, rather than the original location of Gdansk in Poland.