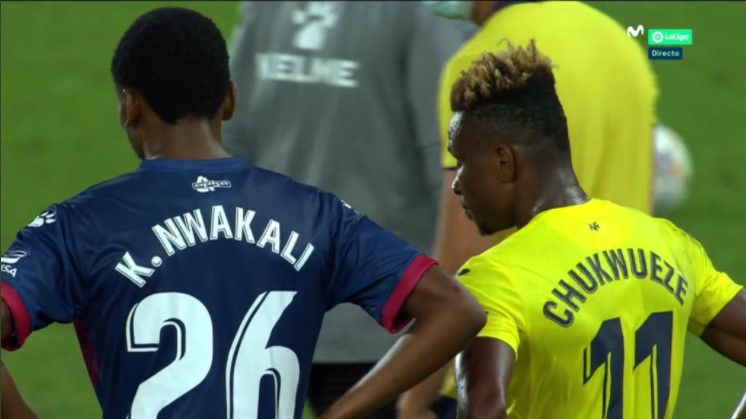 The clash between the duo of Samuel Chukwueze and Kelechi Nwakali in the opening game of La Liga ended in stalemate at the Estadio De la Ceramica.

Villarreal hosted Huesca on Sunday with Chukwueze in action for the Yellow Submarine throughout the game.

His compatriot, Nwakali was not named in the starting XI but came in as a substitute 62 minutes for Juan Carlos.

It was Nwakali’s first top Europe top flight league game since 2016 when he was signed by Arsenal and loaned out.

Nwakali gained promotion with Huesca from the Spanish second division.

The former Nigeria U-17 captain who led the Golden Eaglets to win the FIFA World Cup in 2015, impressed when he joined .

He had to go tough against former Arsenal Francis Coquelin who was later stretcherered out.

It was a fair result for both Super Eagles players as they were both impressive for their clubs.

Chukwueze displayed his amazing skills and his through pass to Gerard Moreno could have put Villarreal in front but the striker failed to make good use of it.

The winger was a thorn in the flesh for Huesca and was fouled on several occasions.

Gerard Moreno equalised from the spot in the second half in the 68th minute.

Both teams could not find the as they had to settle for a share of the points.