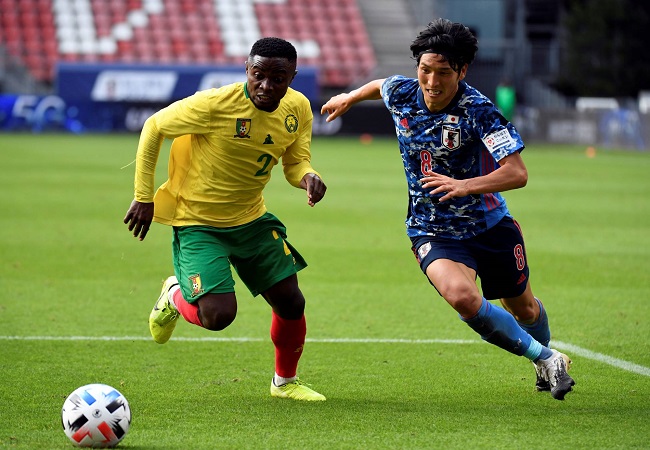 Unlike Nigeria and Ghana in these international friendlies, Cameroon ended up with a soreless draw. The Indomitable Lions and the Blue Samurai were unable to get the better of one another in Utrecht.

Cameroon and Japan played out to a goalless draw in Friday’s friendly meeting in Utrecht, Netherlands. As the Indomitable Lions returned to action following an 11-month absence due to Coronavirus pandemic. This was the Central Africans’ first fixture. And it represented a big opportunity for new coach Toni Conceicao to assess his options against seasoned opposition. The Indomitable Lions did not succeeded in hitting the net to win the game.

For Japan, the game was not only their first in the year. But also the first with a squad made up entirely of overseas-based players

Japan created numerous chances, particularly on the right wing through second-half substitute Junya Ito. But was unable to unhinge a Cameroon squad that defended in depth.

The 27-year-old midfielder for Belgian club Genk was a constant threat down the right side. Delivering one good cross after another into the box.

The 19-year-old wunderkind Takefusa Kubo took the game’s last shot only for keeper Fabrice Ondoa. But he tipped the free kick over the bar.

The game was the first of two friendlies behind closed doors at Utrecht’s Stadion Galgenwaard. Japan will take on Ivory Coast on Tuesday for the second friendly.