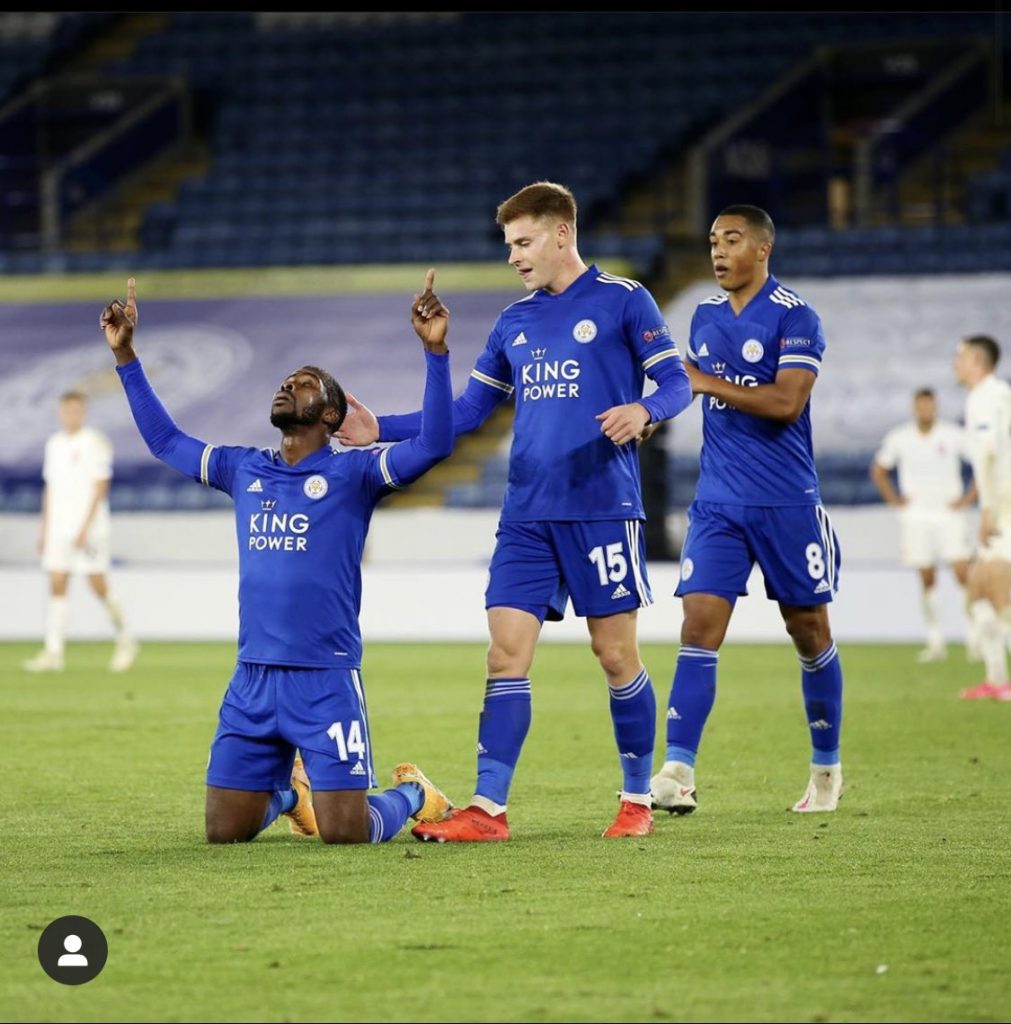 Kelechi Iheanacho was full of praise to God after he helped Leicester City to a comfortable 3-0 win against Zorya in the Europa League opening game at the King Power Stadium.
Iheanacho was handed a starting XI place by Brendan Rodgers as the Foxes played their first European competition game since the 2016/2017 season.
The forward was exceptional as he contributed in two goals before he also added his name to the scoresheet.
James Maddison put Leicester City in front just 29 minutes as Iheanacho provided the assist.

The former Manchester City again turned in another assist for Harvey Barnes who scored in the 45 minutes.
Iheanacho capped up what was already an impressive night for the Foxes as he scored in the 67th minute to make it 3-0.
He however did not complete the game as he came off for Ayoze Perez in the 71 minutes.
After the game, an excited Iheanacho took to his Twitter account to return the glory to God.
He wrote, “Great team performance
All glory to God.”
In the same vein, Leicester City manager Rodgers was satisfied with the clean sheet especially after the Foxes lost two consecutive games at home in the Premier League.
Rodgers spoke with LCFCTV in his post-match interview and was impressed with the performance of the goalscorer.

“A clean sheet was important for us. Fundamentally, that’s your base.

“And so, I thought defensively we had to work very, very hard against a good team.

“So yes, I thought we played very well in spells of the game, scored good goals, and their system really tests you.

“I thought Harvey’s goal was a great individual effort and showed great composure.

“Madders (James Maddison) being up there and wanting to score was terrific and our pressure for the third goal was good and Kelechi, he slots it away really well.

“So, very pleasing, we can be better in areas, but as I say, to start with a win in the group was important.”

The result proved to be the Foxes’ biggest home win in European competition, and Rodgers has tipped his side to improve their potency in front of goal in the coming weeks.

“It’s nice for the players to feel that and like I say, we can be better,” he said.

“We can have greater movement at the top of the field to create even more chances.

“But we were good in our tactical idea because we changed in the second half to play a diamond to sort of killing their threat once we’re 2-0 up, but also still give us that real threat going forward.

“So, I thought the players managed that side of it well.”