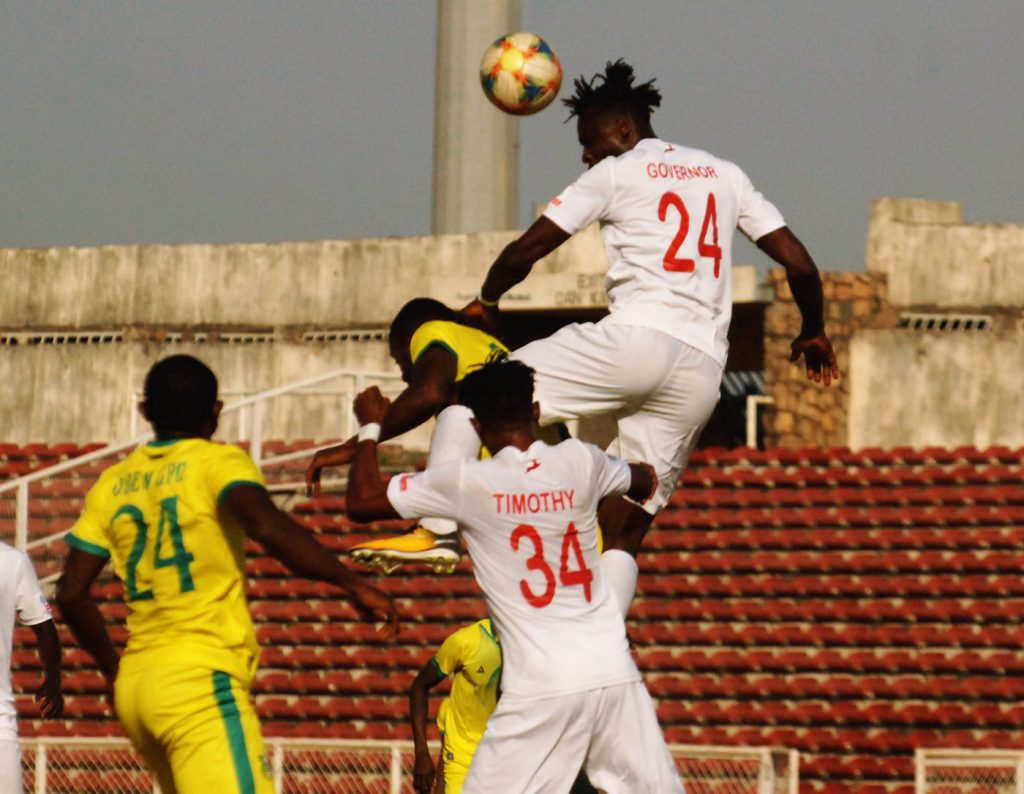 The 2020/2021 season of the Nigeria Professional Football League (NPFL) entered Matchday 14 as the season approaches mid-way.

Nine games was played on Sunday and Monday with the Oriental derby between Enyimba FC and FC IfeanyiUbah postponed due to their involvement in continental action.

Matchday 14 crackers produced five draws as no team won away from home.

A total of 17 goals was scored with two of the games ended in goalless.

Read Also: It’s good when you just focus on the next game-Maikaba

After a poor start to the season, Adamawa United seems to have find their rhythm winning a three consecutive game as they struggle to get out of the relegation zone.

They are now seven points away from safety

Rivers United returned to winning ways after two defeats and a draw with a convincing 2-0 w8n at the Adokiye Amasiemaka Stadium.

Kwara United retained it’s place at the top of the NPFL extending their unbeaten run to four games following a 1-1 draw against Wikki Tourists in Bauchi.
Chinedu Udeagha had given Wikki Tourists the lead on 39th minute. Kwara United are now unbeaten in their last four matches.
Also, in the battle between Kano Pillars and Enugu Rangers, both teams settled for a 1-1 draw failing to overthrow Kwara United.
Rangers took the lead in the 9th minute through Ernest Governor but Pillars equalized through Auwalu Ali Malam.
Both teams are now 2nd and 3rd respectively  on the table.
At the Lafia City Stadium, Ikenna Offor’s 49th minute goal fired Nasarawa United into rhe top five as they defeated Lobi Stars 1-0.
Plateau United perfect home record remain in tact following a resounding 3-1 win against MFM FC t the New Jos Stadium.
A second-half brace from Mohammed Zulkilful and a late goal from Daniel Itodo ensured that Plateau United remained unbeaten in their last four league matches.
Adeyinka Najeem scored the consolation goal for MFM FC.
There was no love lost in the Oriental derby tie between Heartland FC and Abia Warriors in Owerri.
The Naze Millionnaires fought back from tow goals down to share the spoils with the high flying Abia Warriors.
Warriors took control of the game and we’re tow goals up before 20 minutes with Godwin Obaje scoring a brace in the 7th and 17th minute to give the Warriors the lead.
Heartland rallied back with goals from Pascal Eze (45th minute) and Samuel Nnosiri (64th-minute penalty) to settled for a 2-2 draw.
At the Ozoro Polytevhnic Stadium, Warri Wolves were held to a goalless by Akwa United.
Also Sunshine Stars pick a point against Katsina United.