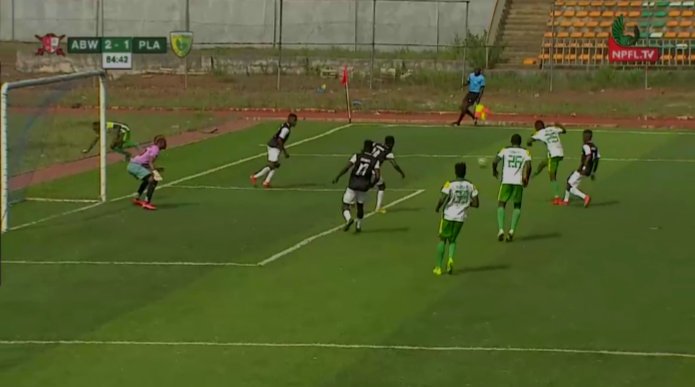 Abia Warriors returned to the winning way following a 2-1 victory against Plateau United at the Okigwe Stadium in Matchday 19 of the NPFL.
After losing 5-3 to Nasarawa United in their last outing, Imama Amakapabo ensured they right their wrong.
Plateau United defeated Enugu Rangers 2-1 in Jos and headed to Okigwe Stadium with the hope of stunning another Oriental club.
The contest was sparked into life just six minutes of play with Paul Samson scoring the opener.

Ibrahim Mustapha equalized for Plateau United from the spot after Markson Ojobo brought down Oche Ochowechi in the box.
Dele Ajiboye’s howler gifted Abia Warriors the chance to retake the lead as Godwin Obaje puts Abia back in front tapping into the net in the 16th minute.
Markson Ojobo denied Oche Ochewochi from equalizing as he cleared off a goal-bound ball from entering the net.
Ajiboye denied Abia Warriors the chance of doubling their lead with a fantastic save that had to require treatment.
He could not carry on and was replaced by Adamu Abubakar in the 32nd minute.
Fatai Abdullahi almost doubled the lead for the host as his shot stung the palms of Plateau goalkeeper Adamu Abubakar parried the ball for a corner.
Abia Warriors kept on knocking to extend their lead but Adamu made several saves to deny the host as the first half ended 2-1.
The second half was an end to end attack but no side was able to score again.
Abia Warriors with the victory moved to 10th position on the log.