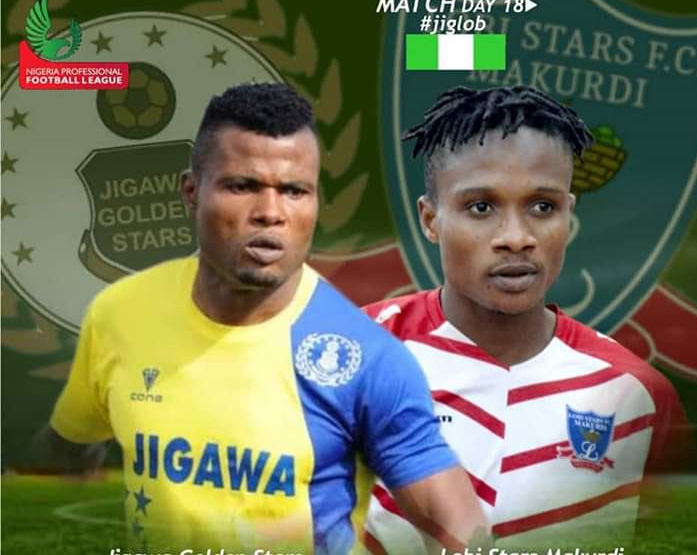 Lobi got off to a good start as they threatened to take an early lead.
The first chance of the game fell to Bello John in the 18th minute but he fired off-target.
Jigawa keeper Sochima made a double saves in the 19th minute to prevent the visitors from breaking the deadkock.
However,  the flag of the assistant referee was raised  up for offside against the away team.
Sochima was called to action again in the 24th minute as he dealt with a cross into his box by punching it out of danger before any Lobi player could pounce on it.
The first half ended goalless with Lobi Stars calling the shots but also failing to make their chances count.
The second half was a bit delayed due to heavy rain and when it finally started, Jigawa began to gather momentum.
Both teams made changes as they with the game still goalless.
Lobi brought in Chinonso Okonkwo for Monday Akile in the 51 minutes as Jigawa made a double change.
Sani Bature came on for Andrew Idoko as Abdullahi Lala took the place of Adeseun Yusuf Adelani.
The hosts got a penalty in the 68th minute after Lobi Stars player was adjudged to have fouled a player inside one box.
The referee pointed to the spot as Samuel Stone stepped forward and converted the spot kick to his side a 1-0 lead in the 70th minute.
Sochima howler after he spilled  a  free-kick saw Samuel Mathias netted the equalizer in the 84th minute.
Lobi’s celebration had hardly ended when Abdullahi Lala pops up at the other end to head the home team in front again off a corner kick.