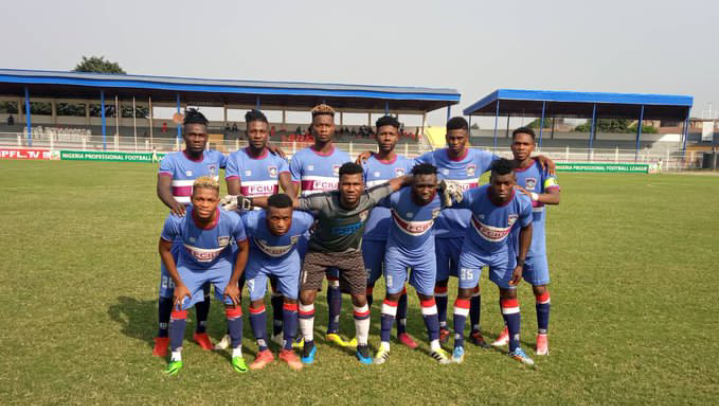 FC Ifeanyi Ubah has requested that the League Management Company (LMC) rescind walkover against them by MFM FC on Matchday 20 of the NPFL and reschedule the game.
The club in a statement made the request after they failed to show up for the game against the Olukoya Boys in the opening games of the 2020/2021 NPFL season.
FC Ifeanyi Ubah in a statement issued by the club management said the walkover against them was politically motivated and a ploy to frustrate the club.
The club noted that they were not duly informed and had thought their is a consensus between them and the LMC to play at their Nnewi homeground.

FC Ifeanyi Ubah were banished to Enugu after their supporter attacked Match official in the game against Rivers United.
They failed to show up on their Matchday 20 NPFL game against MFM FC at the Nnamdi Azikiwe Stadium and the match official and assessor gave the go ahead for them to be walked over with three points and three goals awarded to MFM FC.
However, the management of the Nnewi based club in a statement described the walk over as biased move by the LMC t9 frustrate the efforts of private clubs.
The statement signed by the club management reads:
“The Management of FC Ifeanyi Ubah wish to state without equivocation the ill treatment meted out on our dear club occasioned by the Walk Over against us for the proposed match day 20 clash against MFM FC on Sunday (09-05-2021) as well as inform the public about the League Management Company’s (LMC) moves and ploy aimed at frustrating our effort as a private club with the sole purpose to get us relegated by the end of the 2020/21 season and also deliberately trying to play a political script of Anambra politics as orchestrated by Anambra State Government.
“We wish to buttress the aforementioned with the following points as stated below:
“Firstly the reason for taking the club to Enugu was a very wrong and unfair decision which we made clear to the LMC, the culprit that harassed the official during the match day 14 programme against Rivers United was arrested immediately and handed over to the match commissioner,
thereafter the match commissioner told the police to release the culprit after he had apologized for his unruly behaviour,
hence our reason for insisting  that we did no wrong to be so ill treated, although we eventually honoured the call by playing (Jigawa Golden Stars) in Enugu thereby incurring more costs despite the fact that the allegations against us was not genuine as we had expected the LMC to set up a panel so as to prove our innocence as more serious and life threatening incidence happens in other match centres and non of such severe action is taken,
an example is the brutalization of match officials in the aftermath Katsina United vs Kwara United match (pictorial evidences are available), but Katsina United was never told to play elsewhere. So why the double standard?
“During the break, the second stanza match fixtures were released and there was no where it mentioned that FCIU will be playing their match day 20 fixtures in Enugu at 2pm and naturally, our home is in Nnewi and from the match schedule, it was clear that we were supposed to play at our traditional ground at 4pm.
“There was no official communication to us that we were going to Enugu this second stanza because we had deliberated on that and concluded.
“Nnamdi Azikiwe Stadium, Enugu is the home ground of Rangers International and naturally, games in the NPFL are played by 4pm, there was no communication to us that we were to play in Enugu at 2pm on this fateful day of Sunday, 9th May 2021.
“At some point, LMC wanted us to play at Uyo, claiming that it was the right place because of Live broadcasts which means, they wanted us to leave our traditional ground of FCIU International Stadium, Nnewi.
“In the first half of the season, recall we played one of our home matches in Port Harcourt against Kano Pillars, we saw these decisions by the league body to be taking us away from home as a deliberate measure to frustrate us as the league system does not encourage private investors.
“We want to make it clear that the walk over conducted on Sunday for the proposed match against MFM FC is inappropriate and unjustified as we were not duly communicated of the change in match venue from Nnewi to Enugu let alone by 2pm and as such we were totally unaware of it.
“Again, we believe that  there is nowhere in the LMC Rule book that sanctions walkovers as was applied to us.
“We request that the decision be rescinded in the interest of justice, fair play and support for private football clubs and the match rescheduled.
“Accept the assurances of our sporting regards.”