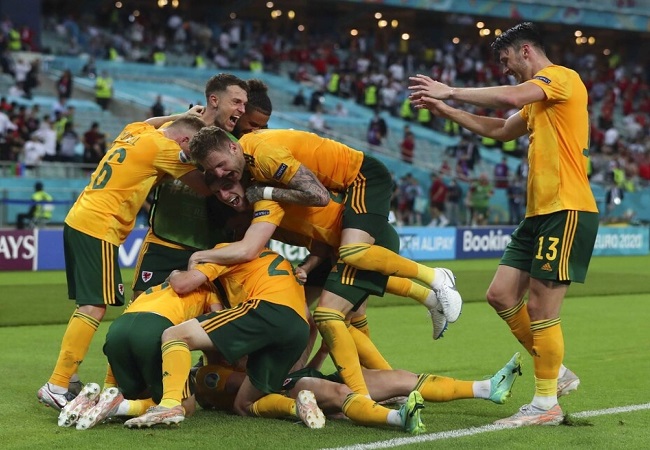 Aaron Ramsey and Connor Roberts scored to help Wales win 2-0 over Turkey in Baku on Wednesday. Wales has thus taken a huge step towards reaching the last 16 at Euro 2020.

Turkey are facing an uphill challenge to reach the knockout stages after losing their first two Group A matches without scoring.

Wales, semi-finalists five years ago, should have won more convincingly. But they wasted several chances including a second-half penalty which was blazed over by captain Gareth Bale. Turkey coach Senol Gunes dropped Juventus defender Merih Demiral after he scored an own goal in Friday’s tournament-opening defeat in Italy.

Robert Page kept the same Wales side from Saturday’s 1-1 draw with Switzerland in Baku. A hostile crowd was expected due to the close links between Ankara and Baku due to a centuries-long relationship solidified with Turkey’s support of Azerbaijan in last year’s conflict in Nagorno-Karabakh. Every early Wales touch was welcomed with whistles from the 30,000 crowd, with up to 4,000 Turkish fans having travelled, including President Recep Tayyip Erdogan.

In a very open first half an hour both sides had very good chances to open the scoring including Turkey skipper Burak Yilmaz, whose effort was deflected out for a corner, and Wales’ Ramsey. With opportunities at both ends as the two teams refused to sit back, the Crescent Stars had two efforts blocked by last-gap defending on the 30-minute mark. With two minutes of the half remaining the vocal home support were stunned into silence by Ramsey’s opener.

ALSO READ : RUSSIA BACK ON TRACK WITH HARD FOUGHT WIN OVER FINLAND