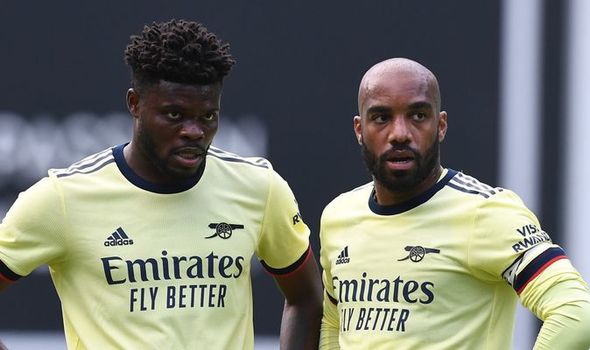 Ghana and Arsenal midfielder Thomas Partey has debunked the rumors claiming he has had a heated discussion over the last week with his club teammate Alexandre Lacazette.

The 28-year old would have been involved in an explosive discussion with his teammate at the half-time of Arsenal’s Carabao Cup third-round clash with AFC Wimbledon on Wednesday with Arsenal specialist Chris Wheatley revealing things on his YouTube channel.

He said : “When the players were actually going into the tunnel, I noticed a fairly heated discussion between Alexandre Lacazette and Thomas Partey“, as per Express.

“It looked like Lacazette was maybe a little bit frustrated; perhaps he was isolated up front.

However, Thomas Partey himself said nothing of this kind happened between him and Lacazette and such a thing will never happen.

In addition, Partey starred again for the Gunners as he marshalled the midfield in Arsenal 3-1 win in the North London derby on Sunday night.