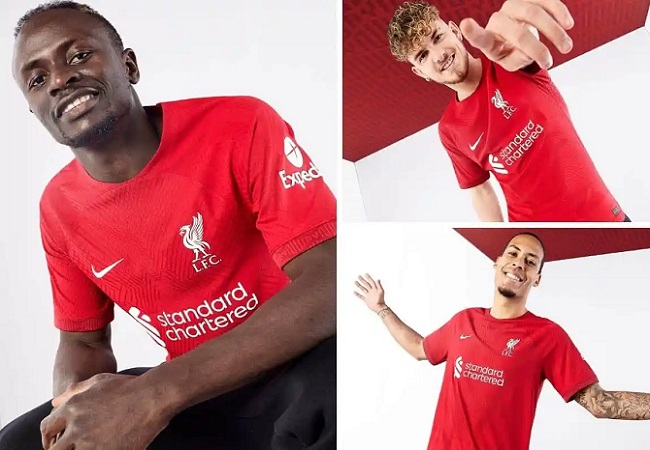 Liverpool FC unveil new Nike shirt home for next season. The new kit is sustainably made, with shirts constructed with 100 per cent recycled polyester fabric.

The Reds’ red home shirt is described as being inspired by the attitude of ‘Scouse solidarity’, with a bold, no-nonsense design reflecting “the mentality of its people”.

It features intricate YNWA detailing on the sleeve cuff to represent the strong bond between the fans and the club.

A 97 emblem encased by the Eternal Flames sits proudly at the nape of the neck in memory of the children, women and men who lost their lives in the Hillsborough tragedy.

The change from 96 to 97 is in recognition of Andrew Stanley Devine, the 97th person unlawfully killed as a result of the Hillsborough disaster.

Liverpool’s kit is sustainably made, with on-pitch and replica jerseys constructed with 100 per cent recycled polyester fabric, which is made from recycled plastic bottles.

Plastic bottles are collected, cleaned and melted down to produce a high-quality yarn for manufacturing, as part of Nike’s wider Move to Zero initiative and in line with the club’s The Red Way initiative.

The club has also introduced a new name and number style for the back of shirt, which also takes inspiration from the city, with a contemporary take on Liverpool’s historic street signs. The product is printed with water-based inks as a more sustainable option and will be worn for cup competitions and friendlies.

Liverpool moved a step closer to a historic Quadruple after beating Villarreal in midweek to reach the Champions League final – with the Reds’ bid having now gone further into a season than any other English side before them, writes Richard Morgan.

Jurgen Klopp’s team headed to Spain leading 2-0 and, despite an early scare as Villarreal levelled the tie with two first-half goals, Liverpool fought back to win 3-2 on the night and 5-2 on aggregate to book their place in the Paris final on May 28 against Real Madrid.