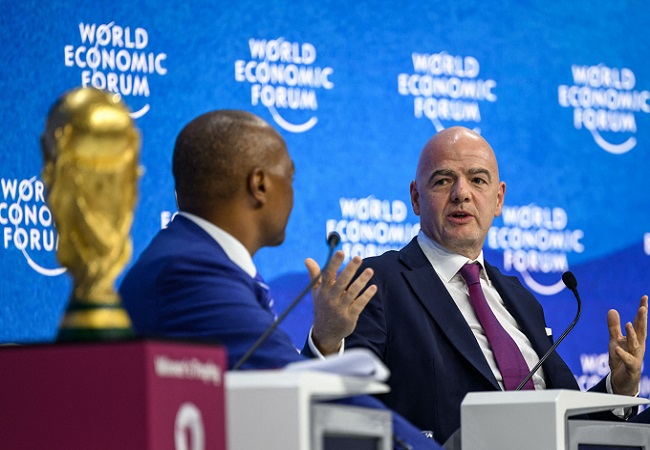 Confederation of African Football (CAF) President Patrice Motsepe has backed Qatar to host the “best FIFA World Cup ever.” He also weighed into the debate on the treatment of migrant workers by saying their employment in the construction of venues has had “huge benefits”.

Speaking at the World Economic Forum in Davos on a panel which included FIFA President Gianni Infantino, Motsepe was full of praise for the host of the next World Cup, which is scheduled to take place from November 21 to December 18.

“It’s a great privilege and honour for not only the Middle East, but for the developing world and football all over the world that the World Cup is coming to Qatar.” Motsepe said.

“We cannot think of a better place or better personification.

“This is going to be the best FIFA World Cup ever, we’ve got no doubt about that.

“The other issue is that football has shown us over many years in a very unique way that it brings people together from different language groups, different races, different religious backgrounds.

“It has served as a unifying force.”

Motsepe, who was elected CAF President in March 2021, also said there were many positives for people who have worked on the construction of stadiums and infrastructure projects in Qatar, despite well-documented evidence of what Amnesty International last week called “human rights abuses on a significant scale” inflicted against migrant workers.

“Every time I’m in Qatar, I see thousands of people from all over the world having the privilege and excitement of employment and taking money home with the building of the stadiums and the hotels.” Added Motsepe, who is the fourth-richest person in his home nation, South Africa.

“The benefits and the impacts of the World Cup in Qatar far surpasses the huge infrastructure that’s taking place in Qatar.

“It has huge benefits for our people in the Middle East as well as worldwide.”

Amnesty and a coalition of rights groups recently called for FIFA to compensate migrant workers who developed this infrastructure to the tune of $440 million (£352 million/€411 million).

That number matches the prize money offered to teams participating in the World Cup.

More than 95 per cent of Qatar’s construction workforce is believed to be comprised of migrant workers from East Africa, South Asia and South-East Asia.

A Guardian report last year found that more than 6,500 labourers from India, Pakistan, Bangladesh, Nepal and Sri Lanka have died in the country since Qatar was awarded the World Cup in 2010.

Of those, 37 deaths were directly linked to the building of stadiums to be used for the tournament.

The Qatari Government claims it has made progress on labour reforms, saying it has moved away from the kafala system, which forced foreign workers to ask for their employers’ consent to change jobs or leave the country.

Infantino, who will next year seek a third term as FIFA President, claimed the World Cup in Qatar will unite the world.

“[Nelson] Mandela was saying that sport can change the world, that it can inspire, that it unites., and he was right with that.” Infantino insisted.

“Football, as the most popular sport in the world, has a unique reach.

“This World Cup in Qatar will be watched by 5 billion people, way above half of the world’s population.”