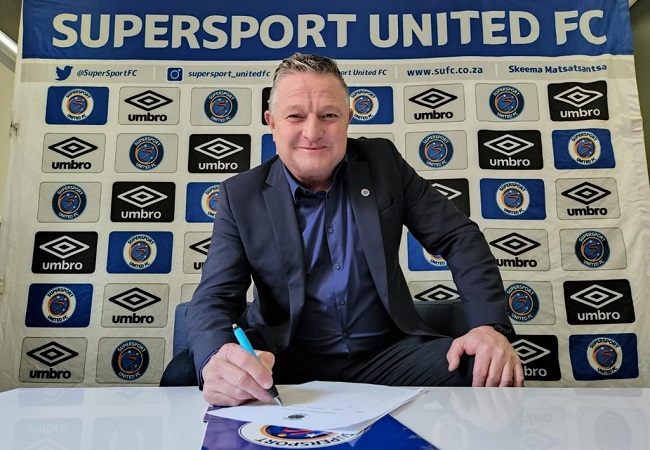 As reported earlier, Gavin Hunt finally lands at SuperSport United as the club confirmed the former Kaizer Chiefs coach  as their new manager ahead of the 2022/23 season. Hunt thus makes a return almost 10 years after leaving the club to join Bidvest Wits in 2013.

Also Read : GAVIN HUNT TO RESUME COACHING DUTIES AS SUPERSPORT ARE CLOSE TO NAME HIM

Stan Matthews, the CEO of the club heaped praise on the experience of Hunt and hoped he could inflict his know-how on the good crop of youngsters the club has coming through the ranks.

“Gavin has a great history with our club. And his coaching record speaks for itself with four PSL League titles and domestic cups to his name.” Said the CEO.

“We have some fantastic young talent in the club that will benefit from Gavin’s vast experience and coaching ability. And we look forward to him blending our youth with the experienced players we already have and the couple of new players who will be joining us in the weeks ahead.”

A three-time league winner with SuperSport, Hunt was last in a coaching hot seat last year, before he was shown the door by Chippa United. He has been itching to make a return to topflight football and will coach a side he knows well, though a lot has changed since he left.

Other coaches competing with Hunt for the coaching role are Fadlu Davids, Gavin Hunt, Benni McCarthy, Cavin Johnson and Lehlohonolo Seema. The latter who is one of the coaches that SuperSport considered the most. But the choice finally fall on Hunt, who joins Matsatsantsa on a two-year deal.