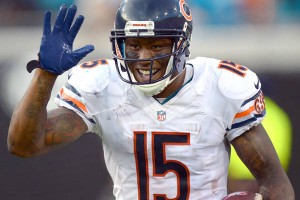 The Chicago Bears wide receiver, when asked about the rash of Adderall-related suspensions in the league this season, said he’d heard of all kinds of methods players have used to get an edge, including the use of a famous little blue pill.

“I don’t know too much about Adderall,” Marshall told news reporters “I know guys, it is such a competitive league, guys try anything just to get that edge. I’m fortunate enough to be blessed with size and some smarts to give me my edge. But some guys, they’ll do whatever they can to get an edge. I’ve heard of some crazy stories. I’ve heard (of) guys using like Viagra, seriously. Because the blood is supposedly thin, some crazy stuff. So, you know, it’s kind of scary with some of these chemicals that are in some of these things, so you have to be careful.”

Ignoring the sudden double entendre of his “blessed with size” description and the logistical difficulties that could result from receivers trying to run a fly pattern while under the influence, is it possible that he’s actually serious?

The New York times reported in 2008 on a study funded by the World Anti-Doping Agency, where Marywood University tested the drug on several members of the school’s lacrosse team to determine possible athletic benefits.

WADA never added the drug to its banned substance list because there was insufficient evidence that the drug would enhance athletic performance, despite the premise that its ability to increase blood flow to certain parts of the body also would apply to muscles used on a football field.

Then again, maybe some of the experimenting players Marshall mentions were just confused by the message of this classic Levitra ad.