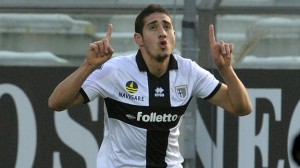 Parma striker Ishak Belfodil was not included in Algeria’s preliminary African Nations Cup finals squad, ending hopes that he might be persuaded to play in the tournament.

Belfodil had sent out mixed messages about going to the three-week finals in South Africa.

He changed his footballing nationality to Algeria, after playing for France at junior level, but then turned down recent call-ups from national team coach Vahid Halilhodzic.

Lingering hopes he could be persuaded to take part were ended on Tuesday when he was left off the Algerian Football Federation’s 24-man squad that must be cut by one by January 9.

The north Africans begin their Group D campaign against neighbours Tunisia in Rustenburg on Jan. 22, before playing Togo and Ivory Coast in the first stage of the tournament.

Halilhodzic has included uncapped French-born defender Faouzi Ghoulam, who has had an impressive season in Ligue 1 with St Etienne, after persuading him in recent weeks to play for Algeria.

The coach had visited Europe in an effort to solicit new players from the Algerian immigrant community.

There is, however, no place in the squad for striker Rafik Djebbour of Greek champions Olympiakos Piraeus or former captain Madjid Bougherra.

Nine members of the squad were part of the 23-man selection for the 2010 World Cup finals in South Africa.