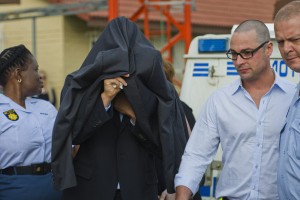 A statement from the family of Oscar Pistorius and his management says they dispute the claim that he murdered his girlfriend “in the strongest terms.”

The statement was issued Friday after the double-amputee Olympian wept in court when prosecutors said they would pursue a charge of premeditated murder against him for the Valentine’s Day killing of his girlfriend, Reeva Steenkamp.

The statement, issued from London, said: “The alleged murder is disputed in the strongest terms.” It also said that Pistorius “would like to send his deepest sympathies to the family of Reeva.”

Pistorius will be held in a police station in South Africa’s capital, Pretoria, until Tuesday, when he appears again for a bail hearing.