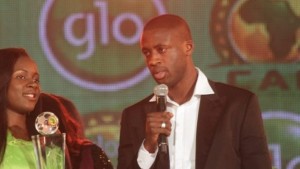 This is what CAF (Confederation of African Football) has just announced on its website. The awards ceremony of the best actors of African football will be held on January 9, 2014 in Lagos, Nigeria. This is the third time in nine editions that the country is hosting the event after 2005 in Abuja and Lagos in 2008.

This will include the election of the best African player of the year. The successor of the Ivorian Yaya Toure, winner the last two years in Accra, Ghana. The midfielder of Manchester City had beaten his compatriot Didier Drogba and the Cameroonian Alexandre Song.

A total of 13 awards will be awarded during the gala that brings together as in each edition the cream of continental football. Including the “Best Coach” and “Player of the Year.”

The trophies of the 2013 CAF Awards

1. Player of the Year

3. National Men’s Team of the Year

4. National Women’s Team of the Year

9. Player of the Year

12. The best eleven of the year
13. CAF Platinum Award