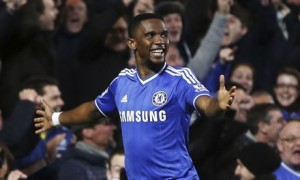 Eto’o at Everton? It is not impossible. Reaching the end of his contract with Chelsea, Eto’o will not remain player of the London club next season. While his relationship with Jose Mourinho has significantly deteriorated in recent weeks, the Cameroonian striker, currently in Brazil with the Indomitable Lions to compete in the World Cup, could evolve in another English club.

To believe the Daily Express, Eto’o is tipped to join Everton. The Toffees, who will surely lose on-loan Lukaku, would show interest in the 33-year footballer in case of departure of the Belgian.

Remains to see if Samuel Eto’o will accept to evolve with the other club in Liverpool as he is already announced at Arsenal and would be willing to play with Gunners.