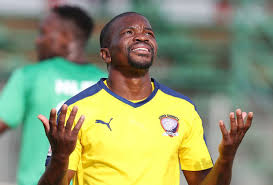 Clifford Mulenga focused on his career this week in the Zambian press. And the striker tells how excessive beer consumption prevented him from reaching his full potential.

“I think alcohol killed my career and I say it with all the love I have for myself,” said the 32-year-old player.
“I have always believed so much in myself. I have always had this confidence to the point where I felt I could do anything. But sometimes, I forget and grab a bottle where I shouldn’t”, he added.

At his beginnings, Mulenga had a bright future. In 2007, with the U20 national team, he finished 4th in the AFCON category and competed in the World Cup. He achieved remarkable performances during this year. He thus won the Best Young African Player trophy at the Glo CAF Awards.

“And now I sit and contemplate where I come from, what has been and I feel as if I have let go,” he acknowledged. In the adventures of his career, Mulenga misses 2012 AFCON and the coronation of the Chipolopolo. Hervé Renard excluded him for disciplinary reasons.

“If I could change something about Clifford Mulenga, I wouldn’t have drunk as much as I did”, He regretted

Mulenga has also had a professional career in South Africa. In the clubs of University of Pretoria FC, Bidvest Wits, Mpumalanga Black Ace, Bloemfontein Celtic, Supersport United and Ajax Cape Town. He made a trip to Sweden to Örgryte Idrottssällskap.

At 32, he is still active. He is announced for the next season in the lower division in the rainbow nation.