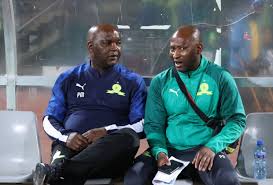 Peter Ndlovu is a former Mamelodi Sundowns striker. He revealed his philosophy following his transition from the playing field to his current role of team manager.

Ndlovu made a name for himself in England after becoming the first African player to play in the new Premier League back in 1992. And went on to score a historic hat-trick for Coventry City against Liverpool at Anfield in 1995.

He left England for the PSL in 2004. He joined Sundowns as one of Patrice Motsepe’s first marquee signings since taking over full ownership of the club. And he went on to represent The Brazilians for four seasons.

Following his retirement in 2011, the Zimbabwean international returned to Chloorkop in 2013. He was then roped in as the team manager for the first team.

“Sundowns has been my home for a long time. I have probably been here longer than everyone. They looked after me as a player. And I think it was easy to have a look at my future and decide to come into management,” the 47-year-old told the club’s website.

“One of the things I used to do during my playing days was manage players. Help them out and do things that help them. Myself, Brian [Baloyi] and other senior players used to try and do that.

So when I was asked to be the team manager. Although it’s a different ball game, I took what I learnt. Of course things change and so does management.  And you have to upgrade and update every time.

The challenge is that you must never use what’s in the past when there’s a new system. And by that I mean, I should never speak about my achievements then [as a player].

It’s what I do now that’s important. Because you are not judged on what you’ve done but [on] what you are doing. It’s a big challenge. You have to respect the players. And be there for them and make sure that you manage and understand them.

When you have respect from the players then it becomes a two-way street. I also get help from a lot of people at the club. Some are around me and make my job easier.” He continued.

Ndlovu arrived to compliment the astute coaching philosophy of Pitso Mosimane and his technical team. Since then, Sundowns have lifted a total of nine trophies including a continental championship in 2016.