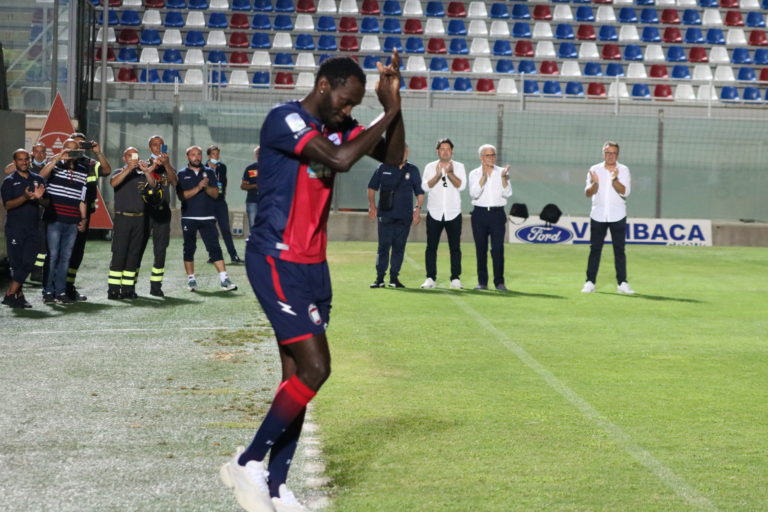 Simy goal against Cittadella got the most vote from the club supporters who voted via Telegram.

Announcing the award on Thursday via the official club website, the club said team poll 32% over the overall votes to scoop the award.

The club announcement on their official website reads as follows;

“Simy’s great goal scored against Cittadella is the most beautiful goal of the 2019/20 season.

“The Nigerian striker, who obtained 32% of the overall preferences, was elected directly by the fans through the poll launched on the official Rossoblù Telegram account.

“Nwankwo scored another pearl with a good margin: the splendid free-kick by Messias at Scida against Salernitana.

“On the podium we still find Simy, who also wins the bronze medal for the great goal trimmed at Spezia in the first leg at the Peak.

The lanky forward superb performance for Crotone in the Italian Serie B saw them gain promotion to the Serie A.

Watch Video Of The Contenders

Simi finished the season as top scorer notching a total of 22 goals in all competition in the just concluded 2019-2020 season, his highest scoring season.

He is targeting a recall to the Super Eagles squad following his impressive performance this season in the Serie B.

Simi was handed his first international call up by Gernot Rohr in May 2018 and made his international debut May 28 against DR Congo.

With the Super Eagles team filed with other top strikers like Victor Osimhen, Paul Onuachu, Cyriel Dessers and others, Simi is optimistic he can still get a recall.

The striker in an interview with ESPN said he has worked hard to get himself back to his best.

“When I went down, I knew the risks of losing that spot that I worked so hard to get to although I didn’t play more, which is perfectly understandable.

“I met a team that was already structured with one of the best African strikers at the moment – Odion Ighalo.

“And it was normal, it was perfect for me to stay calm and learn and then watch how things are done.

” Then all of a sudden, I found myself out again, which is understandable.”

He last played for the Super Eagles in the 2-1 loss to Argentina at the Russia 2018 World Cup.