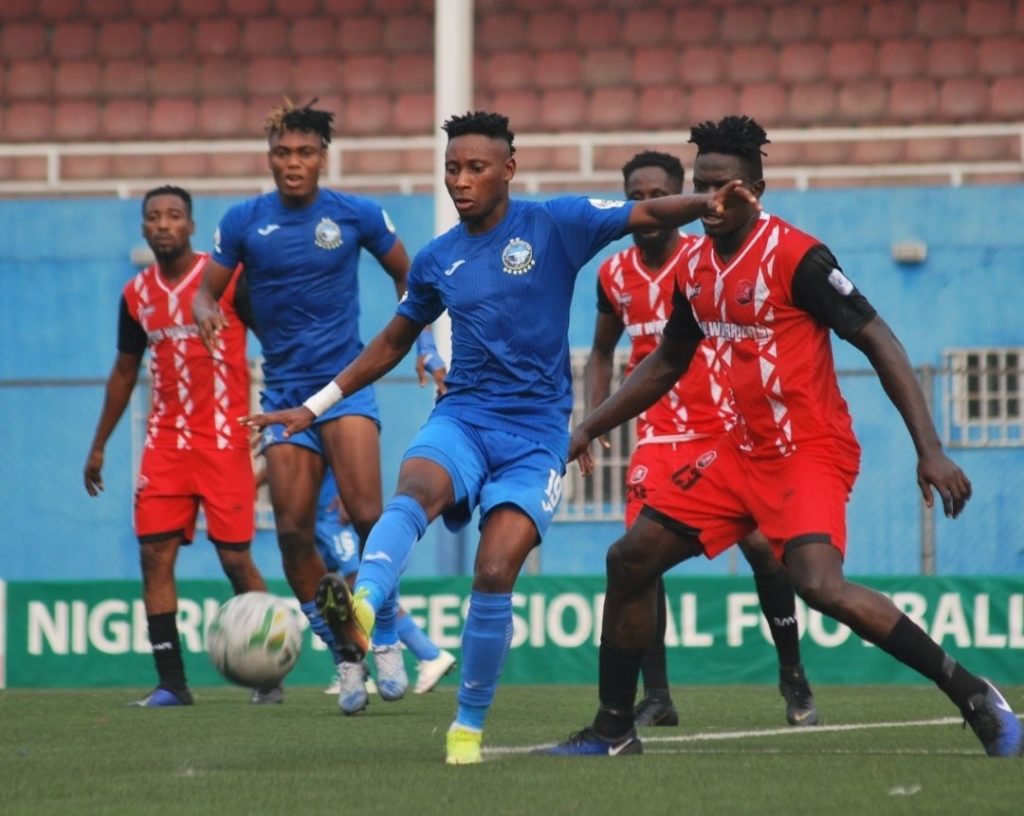 Enyimba kicked off the 2020/2021 Nigeria Professional Football League(NPFL) season with a 1-0 win against city rivals Abia Warriors on Tuesday.
The People’s Elephant hosted Abia Warriors in the fiercest Oriental derby at the Enyimba Stadium, Aba.
Just like every derby in football, the Abia derby which has been going on seven years, undoubtedly produced an exciting football.
Both teams resumed hostility from where they stopped last season as the game was televised by NTA and the streamed live via the NPFL.TV platform.

Abia Warriors got the game underway but it was the host, Enyimba that got the first flash point.
Abia goalkeeper , Ojo Olurufunke was tested with a shot which he found difficult to deal with earlier on.
Ojo made another beautiful save to deny Sodiq Abubakar from scoring in the 27th minute after he was played through by Gabriel Orok.
Enyimba kept on knocking on the door for the first goal this time it was Samad Kadri who forced Abia Warriors goalie to make a full stretch save after.
The first half ended with Abia Warriors yet to concede. Thanks to the excellent effort of their goalkeeper.
The second half was nothing short of the first with the hosts pushing for the goal.
Their effort finally yielded a positive as Abia Warriors player Philiip Ozor handled the ball inside the box.
Samad took matters upon himself and stepped forward to convert from the spot to give Enyimba the lead in the 53rd minute.
Despite leading 1-0, Enyimba continued to play on the offensive with Samad and Abubakar terrorizing the hosts backline.
With four minutes left in regulation time, Enyimba almost doubled their lead but Samad missed a chance to get his brace as his tap from Manyo’s pass went
over.
The victory now saw Enyimba winning their last five meeting against their neighbours.
They will now hope to build on the victory when they travel to face giant killers, Kwara United on Saturday on Matchday 2 of the NPFL.
Fatai Osho men will then return to Aba to try and overturn a 3-0 deficit against Sudanese giants Al Merrikh in the CAF Champions League.