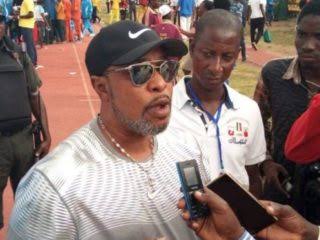 The Chairman Delta State Sports Commission, Chief Tonobok Okowa on Wednesday made a cash donation of one hundred and fifty thousand naira N150,000 to FC Robo.

According the Chairman, Delta State Sports Commission, the gesture was to help cushion the effect of the armed robbery attack the Lagos based team suffered en route Delta State ahead of their Matchday 7 tie.

Presenting the cash donation to the team, Tonobok said it is his little way of showing solidarity as a sport loving person, concerned about the well being of fellow teams, adding that the team being able to honour the week 7 tie despite the trauma speaks volume of how responsible they are.

It would be recalled that given the spate of insecurity in the country, football clubs in the country have recently suffered attacks of robbery and even kidnapping as they often travel through road.

To this end, FC Robo players and officials were reportedly robbed along Benin-Ore Expressway with players belongings including boots and phones carted away.