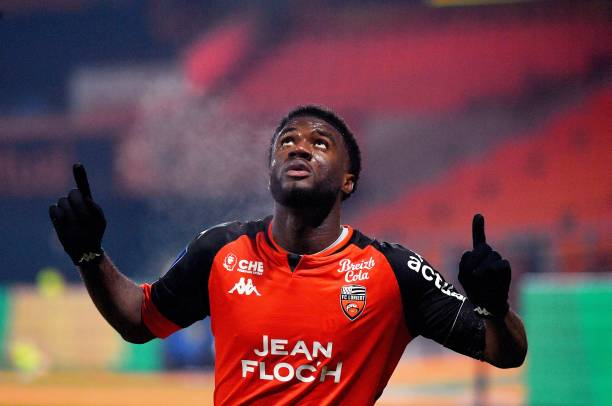 Terem Moffi is gathering interest from top European teams in this summer transfer window which is getting towards the end while clubs are still looking for a reinforcement of their workforce.

The 22-year has been instrumental for French top-flight side Lorient FC since joining them in 2020.

During the last season, Moffi scored 15 goals and provided 3 assists in 34 appearances and started the 2021/22 season with the same energy as he scored during Ligue 1’s matchday 2 as he secured all three points for his side against AS Monaco.

According top French outlet Foot Mercato, the Super Eagle is targeted by La Liga defending champions Atlético de Madrid as they want to make sure they have a strong team ahead of their UEFA Champions League campaign.

Not only Atlético de Madrid are interested in signing Terem Moffi, but also Serie A outfit Atalanta Bergamo who will also feature in this season’s Champions League.

The aforementioned source stated that both teams’ members came to watch Moffi play against Monaco last week and was pleased with his display.

Now, it remains to know whether they will convince Lorient to let on him go despite the fact that he has three years left on his contract.