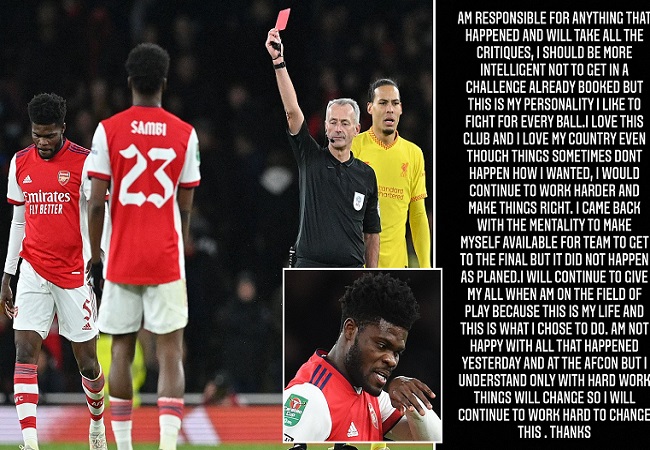 The Ghanaian, who darted back from the Africa Cup of Nations (AFCON) has apologised to the club’s supporters for his sending off against Liverpool that will see him missing this weekend’s Premier League clash against Burnley at the Emirates Stadium.

Also Read :  GHANA KNOCKED OUT OF AFCON 2021 AFTER SURPRISING LOSS TO COMOROS

He had come on as a substitute in the last 15 minutes despite only landing back in London earlier in the afternoon following his country’s surprise exit from the AFCON at the group stage on Tuesday. He was determined to help his side reach Wembley, where Chelsea awaited the winners of last night’s tie.

The 28-year-old explained his moment of madness to Arsenal fans on Instagram. The midfielder claimed that his tough tackling nature is his “personality”. But he vowed to work hard to make amends.

“(I) am responsible for anything that happened and will take all the critiques. I should be more intelligent not to get in a challenge already booked. But this is my personality. I like to fight for every ball.” His Instagram story post read.

“I love this club and I love my country even though things sometimes don’t happen how I wanted. I would continue to work harder to make things right.

“I came back (from AFCON duty) with the mentality to make myself available for the team to get to the (Carabao Cup) final. But it did not happen as planed.” The post continued.

The Ghanaian has become the 14th player to see red at Arsenal under Mikel Arteta since 2019.