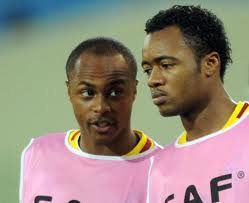 The two sons of the former Ghanaian star footballer Abedi Pele are unhappy with the way the Ghanaian national football team managers treat them so they have decided to retire from the team.

The decision by both Jordan and Dede Ayew who play for Olympique Marseille has been officially communicated but the Ghana Football Association is yet to officially confirm the news.

Andre who was axed from the 2013 Africa Cup of Nations expressed his shock earlier following his brother Jordan who was also eliminated on disciplinary grounds.

Real Madrid star Michael Essein is not ready to join the Ghanaian team whiles Kevin – Prince Boateng is been looked up to by the Ghanaian side to make a comeback after retiring in 201.

Could things be falling apart for the Ghanaian national team as the 2014 World Cup is approaching?