Another weekend of football on the old continent. Various harvest for Africans engaged in the five major championships. On Monday, the Ivorian Gervinho is the man of the weekend for our editorial.

Pierre-Emerick Aubameyang is still at his best. Not really the case that his team conceded a second consecutive draw in League 1. Saturday the Gabonese scored his 17th goal of the season during the 2-2 of Saint-Etienne against Troyes.

Nancy continues to struggle to maintain. And for that, he can count on its Comoros. Second Consecutive goal in as many games in Ligue 1 for Djamel Bakar. The striker has consolidated his team’s 2-0 victory against Rennes.

The early opening of the scoring of the Senegalese, Rémi Gomis for Valenciennes has not helped his team win the three points match against Bastia. Final score 4-3 in favor of the Corsicans.

Funny Saturday evening for the Togolese Floyd Ayité. The midfielder of Reims scored and got expelled after four minutes. A detrimental shorthanded game to his team at the end. The Ivorian Yannick Sagbo reduces the scoring before the young Clark N’Sikulu snatches the 2-2 draw for Evian Thonon Gaillard.

Salomon Kalou has improved since his return from Afcon. The Ivorian striker scored the first goal in the 2-1 win of Lille against Brest.

Sochaux likes the big in League 1. After Paris and Marseilles, the Doubistes have offered themselves Sunday the scalp of Lyon (2-1) in the end of the 30th day. The Franco-Ivorian Giovanio Sio and the striker of Congolese origin, Cédric Bakambu scored. 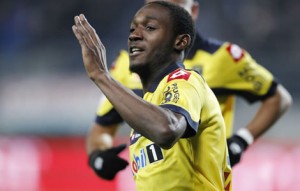 After his hat-trick with the club last weekend, the Equatorial Guinean, Nsue Emiliano continued his good shape. But his 86th minute goal did not offer a win to Mallorca against Deportivo La Coruña (2-3). 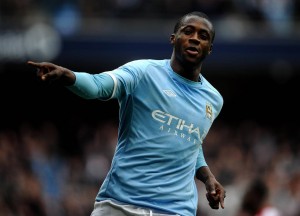 Manchester City has probably lost the Premier League title. But the Citizens expect to play the latest games at the bottom. The case on Saturday with the brilliant 4-0 victory over Newcastle. The Ivorian Yaya Touré scored the last goal for his team.

Gervinho has apparently recovered from his post-Afcon fatigue. This weekend, the Ivorian winger regaled the Emirates stadium, opening the first scoring for Arsenal. Then he delivers two assists to Cazorla and Giroud. All for a 4-1 win for the Gunners over Reading.

The single goal signed by the Ivorian Arouna Kone allowed Wigan to take the three points of the Premier League day against Norwich.

Special mention for another Ivorian. Wilfried Bony scored his 27th goal of the season in 29 games this weekend Vitesse Arnheim in Eredivisie (Netherlands championship).