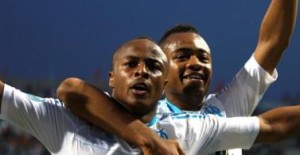 Will Ayew brothers finally be back in their national team? After several months of withdrawal within the Black Stars of Ghana, the two players who play OM should wear again the national jersey!
But Andre and Jordan Ayew have to apologize, and for that write “an application for reinstatement» in the national team, said yesterday the Ghanaian Federation.
They still have not being called for the friendly match against Turkey in Istanbul.
However, everyone hopes to find a compromise now so that they can play the game on the final day of playoffs (Group D) for the 2014 World Cup on September 6 against Zambia.
And play the next World Cup …
Ayew brothers withdrew for various reasons shortly before 2013 South Africa Afcon, but after a meeting with the Ghanaian President John Mahama, they agreed to defend the national colors again.
To be continued