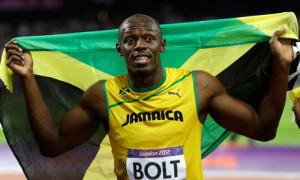 Usain Bolt is the gain for meetings during the season. The presence of the international star athlete boosts ticket sales. Organizers also go all out to get him. On the track of the Stade de France last season, the Jamaican will still be present in Paris for the Diamond League next summer. This was anonymously suggested by the president of the French Athletics Federation.

“At the Areva meeting (sponsor of the appointment), we will have the chance to find a great Olympic sprint champion, a Jamaican. Two years in a row, it is exceptional, “commented Bernard Amsalem, president of the FFA “It is only Paris which happens to get him like that, twice in a row. He loves the meeting and Paris,” AFP reported. “The atmosphere at the Stade de France” would be among other reasons that will bring Bolt back in Paris.

Usain Bolt, double Olympic champion in the 100m and 200m, sprint record holder, should be aligned on July 5 in the 100 m. Last year he was in the starting blocks for the 200m.