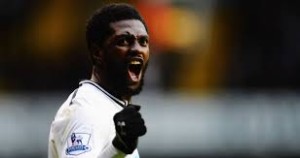 We’re back with our weekly recap of the performance of Africans in major 5 in Europe. Monday, back on the victory of Tottenham thanks to in-form Emmanuel Adebayor, the 5th goal of the season of Floyd Ayité with Reims, Wilfried Bony and Marouane Chamakh who also shine in England.

Big and beautiful victory of FC Valencia who enrolled at the end of the transfer window, Seydou Keita. But the Malian still not sufficiently mature to be fielded, witnessed from the stands the 5-0 victory of his team over Betis Sevilla. The opportunity for the Algerian Sofiane Feghouli to register his 3rd goal of the season in La Liga.

Valencienne can breathe now. Ailing in Ligue 1, the club in northern France has snatched a breath of fresh air Saturday dominating Nice 2-1. A success sealed in particular thanks to the second goal of the Ghanaian recruit Majeed Waris.

On a difficult pitch, Reims have taken the upper hand over Guingamp. And yet it was not a foregone conclusion. The Moroccan Rachid Aliou scored his 3rd goal in 3 games to put the Britons ahead. In the second half, the Cape Verdean Odair Fortes equalized and then Togolese Floyd Ayité off the bench, handed the victory to Reims .

Lille finds the path to success. René Girard’s men have won 2-0 at Sochaux more than ever on their way to the League 2. Belgian Kenyan-born David Origi and Cape Verdean Ryan Mendes scored the two goals of the game.

After his victory in the weekend passed against Lyon, Rennes failed to rehearse. Ajaccio took the opportunity to win 3-1 with a particular realization of the Senegalese defender Ricardo Faty. Young Franco – Ivorian Abdoulaye Doucouré tried to pull a goal out but still insufficient to change the trend.

There are those stats which do not deceive. Emmanuel Adebayor is the man of the moment for Tottenham. The Togolese has netted again the only goal of the meeting pitting Hotspurs to Everton. It was his first goal at White Hart Lane this season. His 6th in 10 Premier League matches.

Welsh derby turned to the advantage of Cardiff dominator of Swansea 3-0. The Ivorian Wilfried Bony took the opportunity to score his 5th goal of the season in Premier League.

Crystal Palace continue who continue their operation keep in the Premier league since the arrival on the bench of Tony Pulis. The Eagles were again overwhelming at home against West Bromwich Albion 3-1. Moroccan Marouane Chamakh has also confirmed his recovery.

Chievo Verona did not weigh very heavy in front of Udinese. The Friuli club led by its iconic captain Antonio Di Natale won 3-0 with a special goal from Ghanaian Emmanuel Agymenag – Badu.