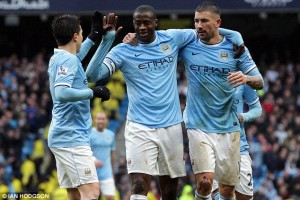 Manchester City has not missed the opportunity to make a big step towards the Premier League title. The tears of Luis Suarez Monday against Crystal Palace (3-3) showed the bad results achieved in the title race by the Reds. And Citizens have managed to take two points ahead at a day of the end.

Manchester City has a very good result against Aston Villa (4-0) although it took until the second half of game to see goals. Edin Dzeko in great shape in recent weeks has done the job, scoring twice. Stefan Jovetic added a 3rd goal late in the game and Yaya Toure scored his 20th goal of the season in the league.

With 2 points ahead of Liverpool and a day to play with a goal difference of +13, a single point will be enough for City to get hold of their second coronation of England in three years.